It happens.  I am in between art projects, and the opportunity and desire to do the Alabama Chanin thing has come together. The sewing is addictive: I say I will stay with it for just one more section..... until the afternoon has passed. My project is not following the rules exactly. I intend to sew the pieces together by machine; the designs are mine -- taken from my lichen sketchbook; and I have probably not read the directions well. I did read about "lovin' the thread."

This is what I have so far: 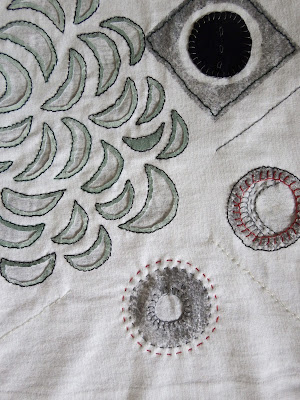 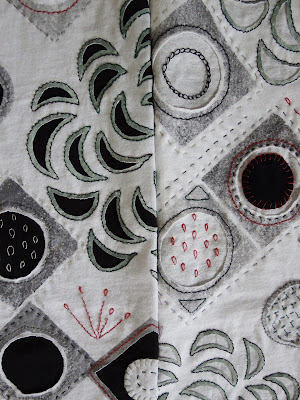 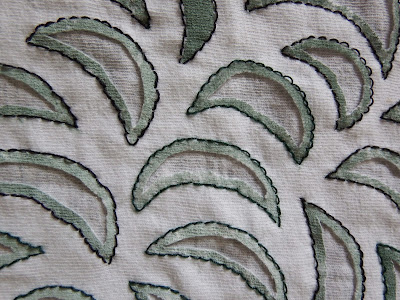 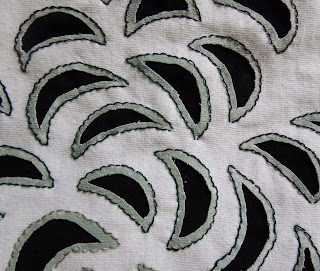 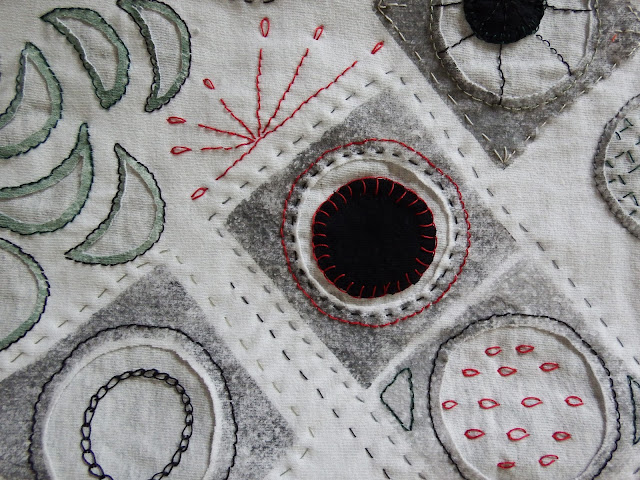 This seems to be the time of year that birds -- robins in this case -- like to perch on the top of the very tall trees in my neighbourhood and sing. As has been documented here with crows, this always catches my attention. Yesterday morning I "caught" this fellow: 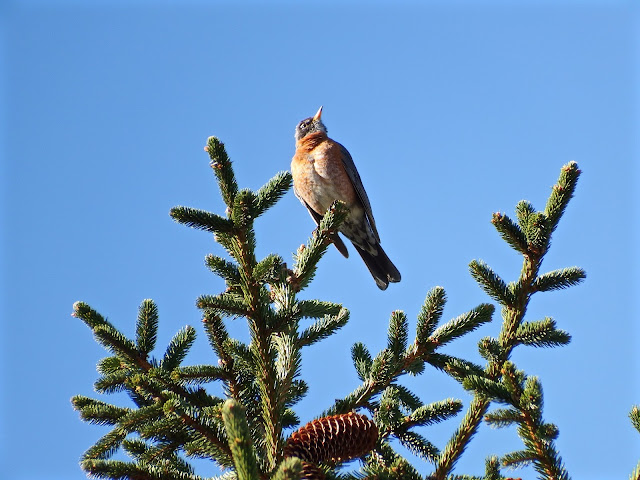 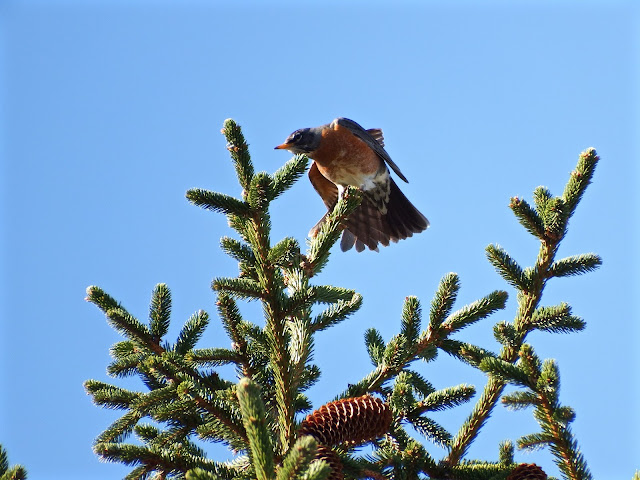 Just to get a sense of where he is, here are photos as I retract the lense: 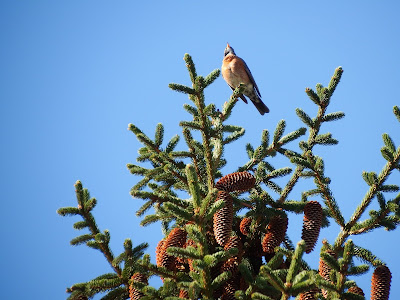 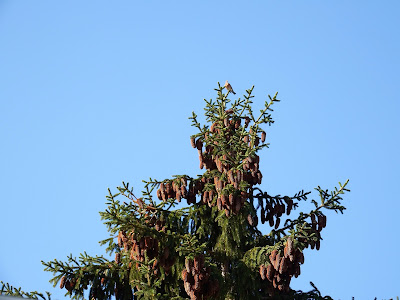 I was on the deck, looking over the house to the top of the tree in the photo below: 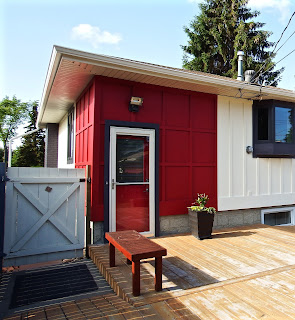 Today I put two 4" x 6" post cards in the mail for the Rosthern Station Arts Centre  fundraising exhibition. The rules say that the art work must go through the postal system, with or without an envelope. I sent one with an envelope, one without. 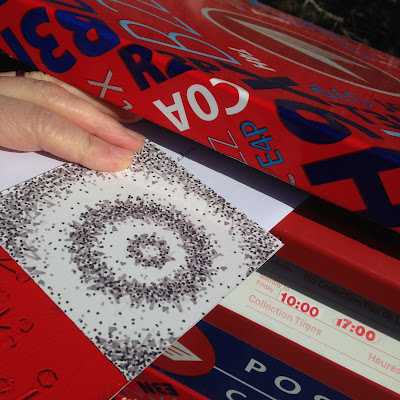 These are the two that I sent: 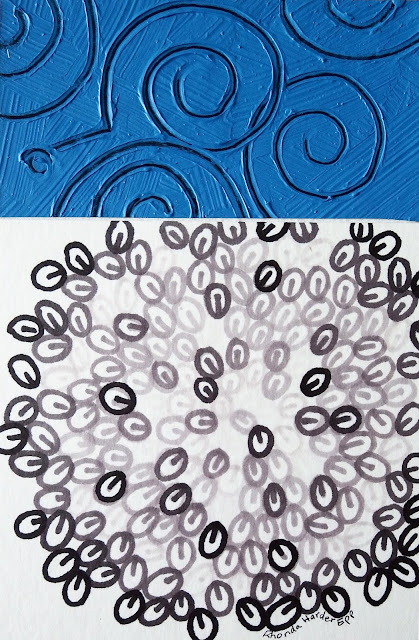 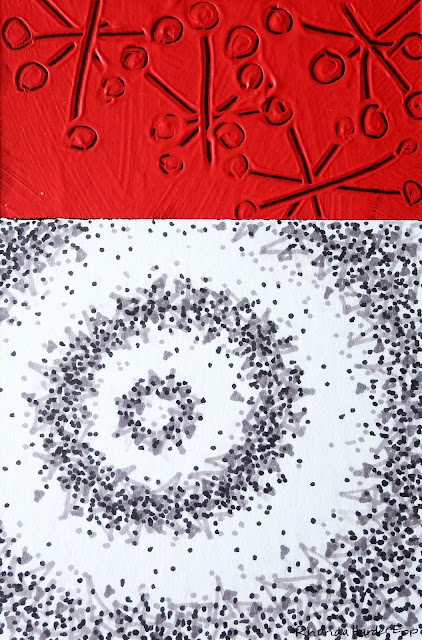 This one stayed home: 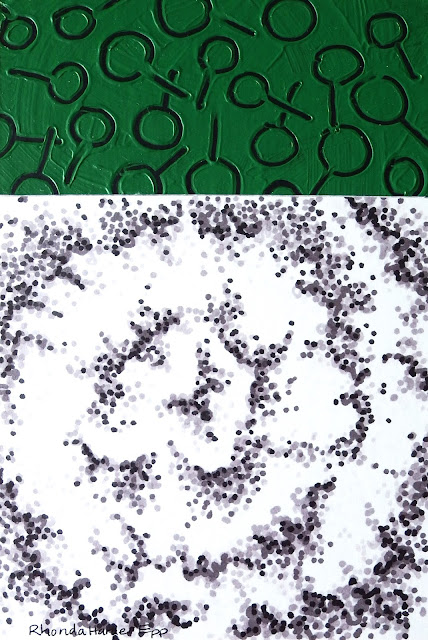 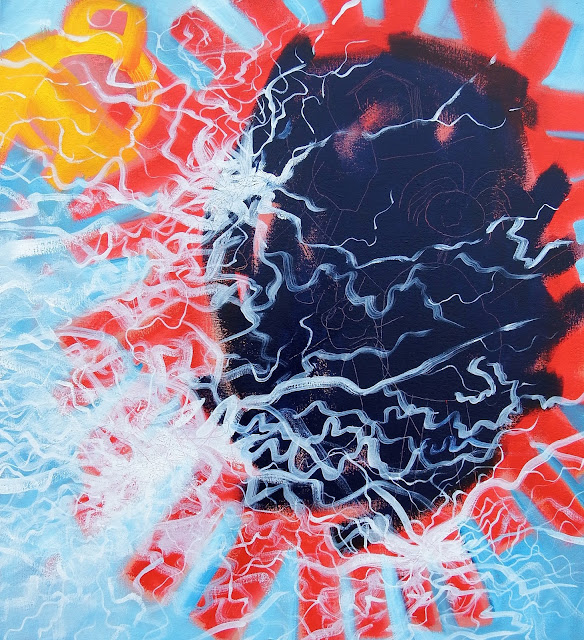 I was a kindergarten teacher and some decades ago a child I will call T spent a few weeks in my class. She was in foster care. I didn’t really know her story, but could conclude that things in her life were problematic, given the need to remove her from her family’s care. Despite this, she appeared happy, effervescent even. She did a painting during that time which I held on to, partly because I tried to retain one painting per month from each child, all of which were taken home at the end of the year, but in her case, she was gone before I could return it.

The painting was a sunflower with a big dark centre, surrounded by red petals; there is a sun in the top corner. I thought at the time that the big dark centre was telling us something about her experience. That there was something deeply unsettling she kept inside, while she wrapped it with colour and a receptiveness to the good she could find.

In this painting, I have quoted T’s painting, adding some figural elements. Resilience counters the big dark parts with life asserting petals. Time, presented in the obscuring white lines, either eases the dark parts, or obscures the bright ones.

Where Do Their Dreams Go? 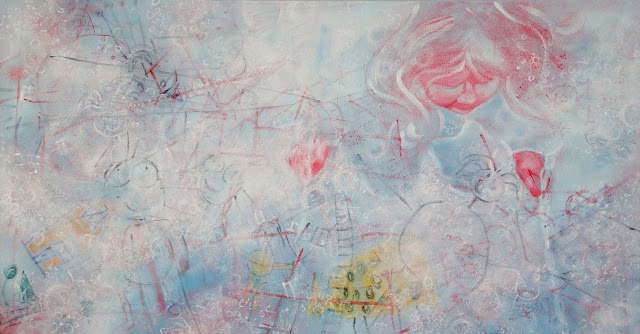 “It is too simplistic to just blame it on adolescence because there are teens who remain focused and who do want to pursue a good education,” he wrote. “I wonder what kills the dreams of childhood of those who get lost on the journey?”

Stephen King, Principal La Loche Community School, 2009 in a blog post, quoted in the Edmonton Journal (Douglas Quan), January 29, 2016 in a story about a 17 year old in La Loche who shot several people, 4 of whom died.

This painting is a response to the events in La Loche, and in all the other places were similar shootings have been carried out by hopeless young people. The child on the swing is a bit ethereal and timeless. Around her there are layers of drawings, aspirations, and creations of the imagination. The top layers of white, obscure the dreams in a sort of mist.