There is a 1950’s style strip mall that transports me from north-east Edmonton to somewhere in the Middle East. Among the businesses there is a pita bakery that bakes a good portion of the pitas sold in the city; there is a sweets bakery with more varieties of baklava than I knew existed; there is a grocery store where you can buy 10k bags of couscous; and there is a ladies clothing store with more scarves than I have ever seen in one place. The first time my husband and I went to this neighbourhood we were on a new-to-the-city explore. We ate at the bakeries, purchased couscous and saffron at the grocery store, and I bought a purple scarf at Sara. The second time I went to that strip mall I skipped the bakeries and was focused on going to Sara to purchase a scarf for a friend who was undergoing chemo treatments. The woman was very helpful. She insisted I also take a knitted cap - a gift from her to my friend — which would feel nice on a bare head and help hold the scarf in place. She showed me a fancy way to tie the scarf on, but I was not very good at it. I have been there a few times since, but the most recent visit was with a Syrian friend, new to the country, who was interested in clothing. While she did her own shopping,  I entertained myself by looking at the scarf wall. Not surprisingly, I was soon choosing between a few scarves that attracted me. In the end I selected the one that happened to go well with what I was wearing that day. While we were in the store the weather changed and the temperature dropped— as will happen in Alberta. I left the store wearing my new scarf, happy for the extra warmth, and feeling satisfyingly justified. It is the October scarf. The geometric interpretation is a 12 point star like the one in the previous post.

These photos show the underworking of a 12 point star made from 4 triangles, with an interior woven design: 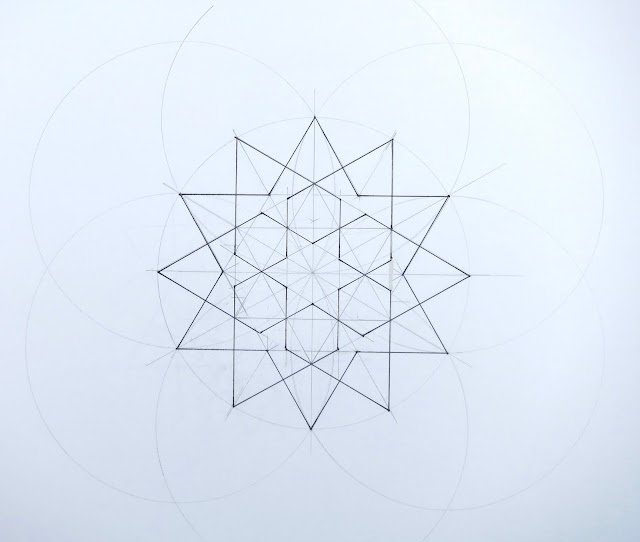 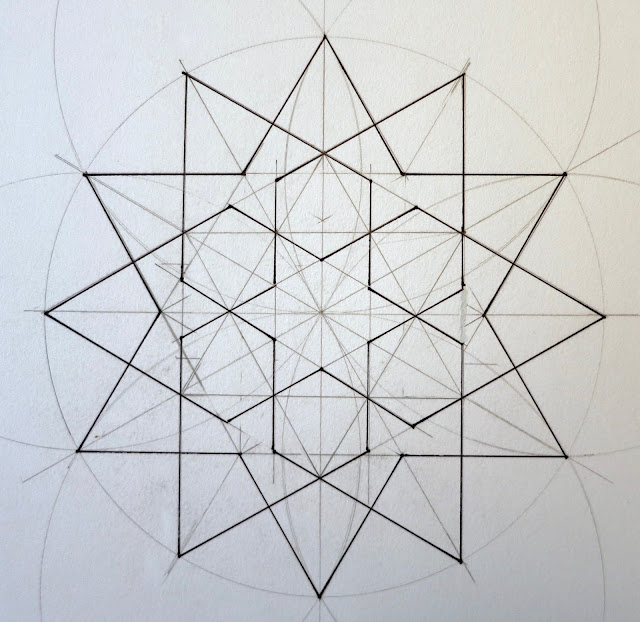